JavaScript is loosely typed, object oriented, functional programming language where everything is an object.

Then there are two special data types :

And then everything else is an object. Number, String and Boolean values are immutable while objects in JavaScript are mutable.

Objects in JavaScript are simply the key value pairs, where value could be of any type; a primitive, an object or even a function.

A function contained within an object is generally referred to as a method.

A key in an object is called as a property which could be any String even an empty String, whereas property value could anything but undefined.

When objects are passed around to and from functions, they are passed by reference.

One of the ways, object could be created in JavaScript is using Object Literals. Here we directly initialise object with properties and the values; we specify those inside pair of curly braces, { and }, separated by comma.

property value could be any String, but if it is not a valid JavaScript variable name, like last-name in above example, then it should be mentioned within single or double quotes.. this is an object that refers to the current object. So inside Object literals it could be used to access other properties.

Object property could be retrieved by using . (dot) notation or [ ] (array like notation). If property name is not a valid JavaScript name then you will have to use [] notation only, otherwise you can use . notation which seems more user friendly. But if you want to use a variable as a property name then [] notation could be used.

When tried to access not existing property, it returns undefined.

In JavaScript, an object could be amended by just adding a properties latter on dynamically, or also by removing using delete operator.

JavaScript doesn’t have anything like Classes, but supports a way to create multiple objects sharing similar structure, template that the classes are used for. You can achieve that using a constructor function.

Constructor functions are same as that of normal JavaScript functions. The convention is to name it with first letter in capital; it’s just a convention not a syntax.

Generally constructor function sets fields and methods of objects to be created using this. You can call the construction function just like normal function and if it sets values using this, then the values would be set to what this is referring to and that generally would be a global scope, window in case of browser.

In above example when Person is called without new, this is referring to global scope and so the properties firstname, house etc and functions sayHello, print etc. are available on global scope.

You can set functions at prototype level as well. That way also methods could be created for all the objects created with new on the constructor function. This is a part of prototype inheritance that we will see later.

We will see later what exactly happen when you call new on any function.

There are three ways to call functions in JavaScript.

In traditional () way, you just use () after the function name to call it. If you have arguments to pass, you pass those into the parenthesis separated by comma.

Apply and call are methods from Function.prototype, as all functions in JavaScript inherit prototypically from Function.prototype, these two methods are available on all the functions. With these two methods, you can pass in the value of this for the context of the function you are calling. That means, first argument to call or apply method is an object that acts as this within the function you are calling.

Only difference between call and apply is how argument are passed to the function to be called. In apply we pass the arguments in the form of array. So second argument to apply is an array of arguments for the function that you are calling apply on.

In case of call, second onwards all arguments are used as the arguments for function that you are calling the call upon.

When new is called on a construction function, a new object is created that is referring to the construction function (actually the prototype of it) through __proto__ property. Every Object in JavaScript has property named __proto__ that refers to prototypical parent of that object. Also it is important to note that every function in JavaScript has prototype property which refers to a common object that is shared by all the objects created with new on the function.

When new is called in JavaScript on some function new object is created and returned. It happens in three steps.

When constructor function is defined it will have following structure. lastName and say would be added to Stark.prototype.

When Stark is called, it just sets firstName and print to whatever this will be referring to while execution. 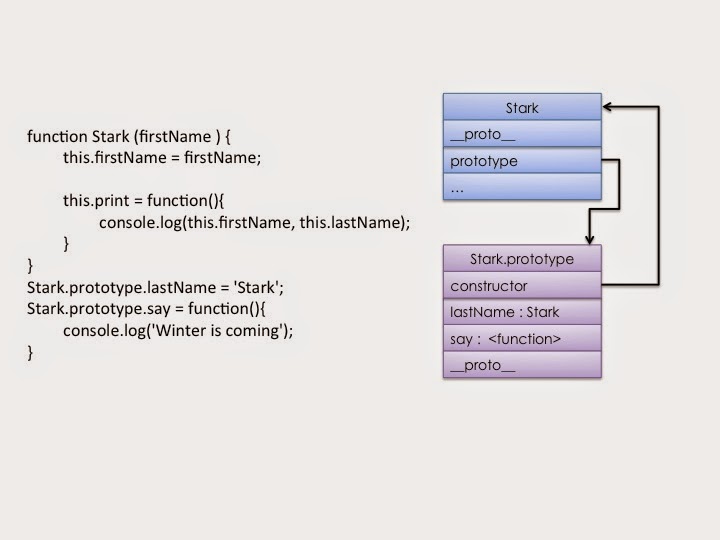 When new is called as

1) Empty JavaScript object is created with arya pointing to it.

2) Stark method is called using call or apply so as to use arya object as this, so that properties set to this from within Stark will be added to arya. I don’t know whether it’s call or apply. Just know that purpose is to have new object to be used as this, that is what first parameter of either of these two methods represents.

So when called as Stark.call(arya, ‘Arya’), this function sets firstName and print as properties of arya object. 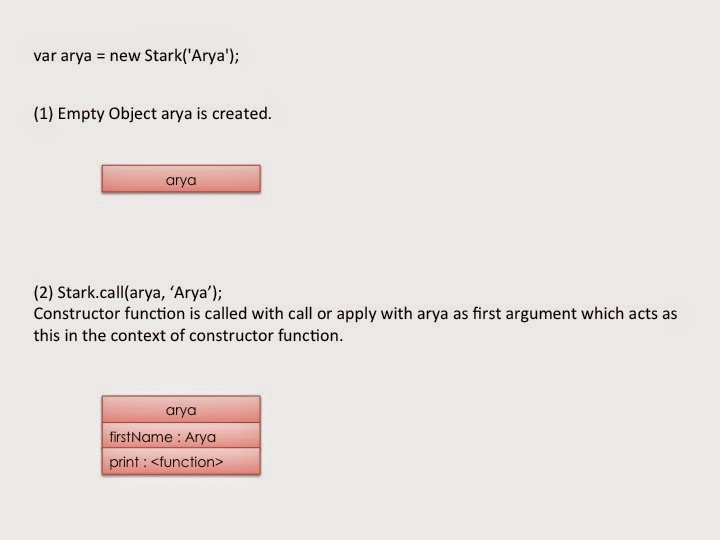 3) Next step is to set __proto__ of this new object to prototype property of constructor function that is Stark.prototype. As __proto__ property is used as a parental reference in prototypical inheritance, properties of Stark.prototype gets available to arya object as well. 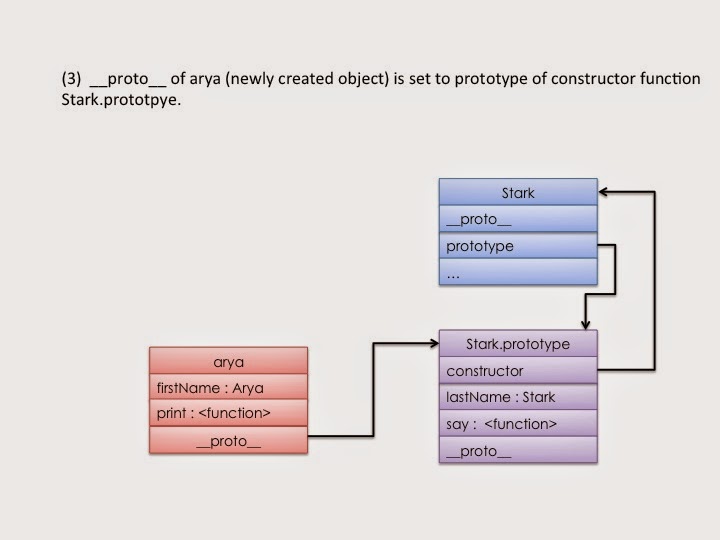 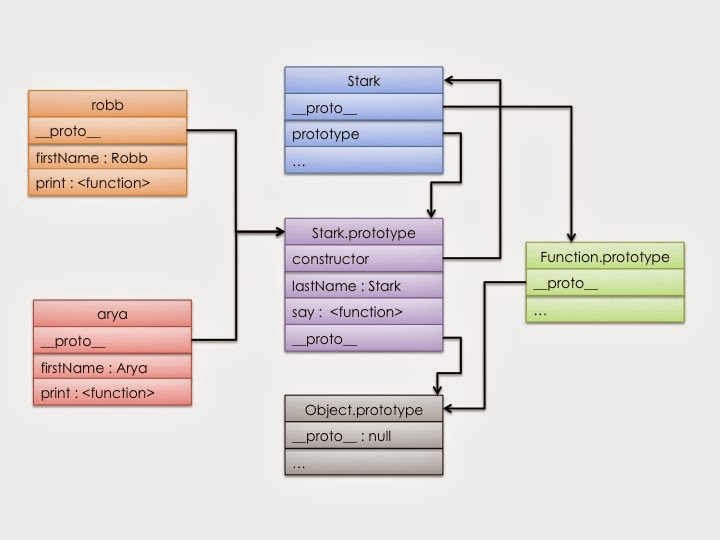 Advantage of having methods at prototype of constructor function (e.g., say) is that only single copy of that function/method would exist and the same would be shared by all the instances. And if methods are added to the created objects using this (eg. print), then each created object will have its own copy though the same body.

JavaScript supports prototypical inheritance, which is all different than conventional class based inheritance.

For this purpose every object in JavaScript has a property named __proto__, which points to the prototypical parent of given object.

Also every function has prototype property, which refers to the common object that every object created with a new on the function shares.

So we can say, get is deep and set is shallow. 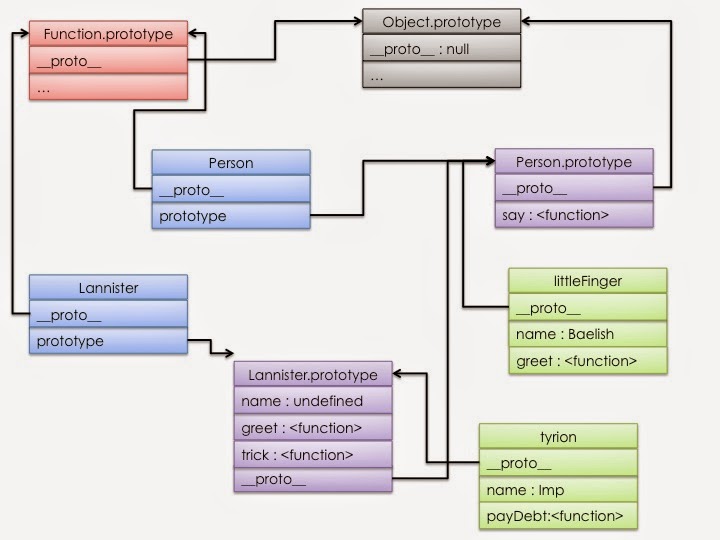 When we try to access some property on tyrion object, JavaScript checks if that property is available on following objects in given sequence :

Value of first matching property in above objects in given sequence is retrieved as a value of the property. If no match is found in entire hierarchy, undefined is returned.

To understand how exactly this happens you need to know what happens when you call new on some function in JavaScript.

If you don’t want to use constructor functions for creating objects and still want to achieve inheritance, you can do that by just setting __proto__ of child object to parent object or by using Object.create() method, which does the same for you.

This could used appropriately to have methods available to all the functions of all the objects.

for in loop in JavaScript iterates over all the properties of object including the ones available from prototypical inheritance.

Notice that var robbProperty refers to property in robb object not the values of properties. So you need to use robb[robbProperty] to access properties.

If you want to restrict the loop to actual properties of robb object only, skipping the properties available from inheritance, then you can use hasOwnProperty method of objects which return if the given property is its own.